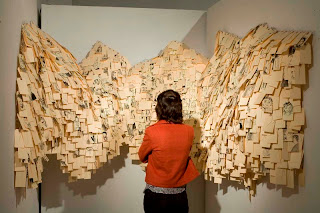 Here is the completed Tags piece- with me standing in it for staffage. I wanted the tags, filled with faces, to come around the viewer and feel like a hug or at least give the impression of a densely populated space. 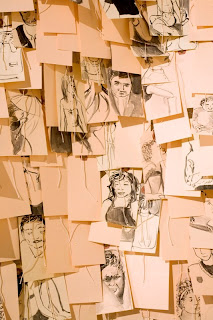 Detail of some of the paintings. I started this project in January of this year and painted nearly 500 tags with gouache. Each tag only had one person painted on each one. 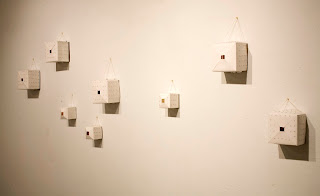 This piece was on the wall perpendicular to the tags. I made 8 ‘dioramas’ out of paper and hung them on strings. Poking through the outside of the box were metal pins. Most were folded down, but others stuck straight out, creating a somewhat uninviting exterior. 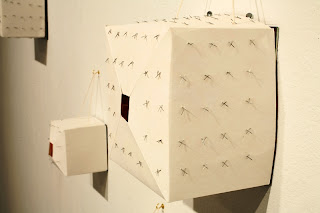 Each of the pins were actually part of a ‘pin ticket’ (a tiny 11/2″ by 2″ card) that I had done drawings on and then pushed through to the outside of the box. 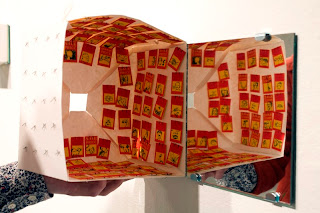 Most of the pin tickets (which say “Sale Price” at the top) also had tiny pen drawings on them- many of people, either singular or together, but some of feet, bananas, pets, bikes, and other everyday objects. At the back of each box was a mirror, so when the viewer looks inside the box they see a reflection of the interior space, making it look twice as big. They also see their own eye reflected in the mirror, making the viewer become a part of the work. The third piece I included in the show were the clay faces that I have been working on since October 2009. Inspired by Daumier caricature busts, I made 40 faces out of air-drying clay. 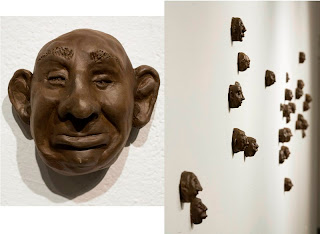 A close up and a side view. This winter I started making some of the faces smaller, or ‘submerged’, so they didn’t have ears showing, or only a nose and some eyes. I was interested in making the faces look like they were emerging from water, but despite many, many tries, I was unable to make that happen for the show. In the end, I’m glad I just showed them how they were without trying to add any other materials. 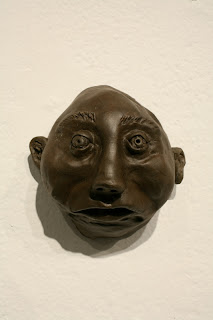 Each face was unique. Some of them were silly, like the one above, but most had average expressions of content, happiness or confusion.