Perfection is a Trifle Dull 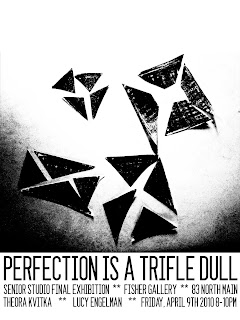 The year of the senior studio program culminated in a thesis exhibition on April 9th, 2010. I showed work with Lucy Engleman, a sculptor and video artist. Above is our show poster, designed by Eliza Koch.

Below is my artist statement for the works I’ve been creating this year. Note- if you came to the show, this is a different artist statement than the one you saw there. As of right now, I like the following one better.

Ever since I was a small child, I have had intense physiological and emotional reactions in crowded public places. Until I spent a semester in Beijing, China in the Spring of 2009, I thought I had successfully dealt with these feelings. I arrived during the Chinese New Year and my first tourist excursion was to a Temple Festival. I have never in my life been someplace so densely packed with human bodies, bodies like a river or a stampede. I literally had to clutch my friends or risk being torn apart from them by the crowd. I was incredibly overwhelmed and needed to leave. The emotion I felt during that experience was the most intense of my entire five months in China.
Since returning to the United States, I have worked to visually express that emotion and the related thoughts it conjures up. I am investigating issues of human density, populations, and personal identity within a crowd. While drawing and sculpting literally thousands of people, it is impossible to not ponder issues of human consumption: the physical space we take up, the air we breathe, and the waste we leave behind.