Sometime shortly after Halloween last year, I decided that I HAD TO go as a deep sea diver this year. I have always thought old diving masks and diving presses (the hard-exterior type, which can go deeper underwater) are really cool-looking. There are many many different types of mask designs and breathing methods, all created by different people around the world to serve the same basic purpose; keep a human alive while exploring the ocean floor!

Originally my plan was to build the entire thing out of closed-cell foam, but I didn’t realize that you can’t just buy that kind of foam at Lowe’s. I called the fantastic Cory Gilstrap, who was my mentor at the Museum of Outdoor Arts’ Design and Build internship. Cory is a puppet master and he taught me and the other interns how to build amazing things (giant puppets, carousel horses, etc) out of this foam. So I called him up as I was wandering around Lowe’s and he had a lot of great suggestions for me. 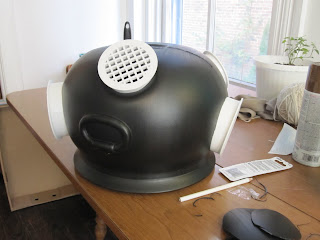 This is my helmet, early on in the process. Cory suggested that rather than try to make a dome using the foam (which it was too late to buy anyways) that instead I use a regular plastic witches’ cauldron and some PVC drains. I cut holes in the cauldron and stuck the drains in to be my ‘port holes’. 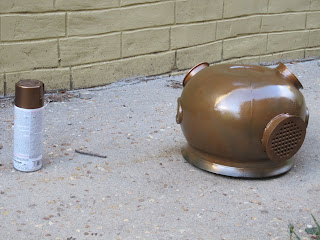 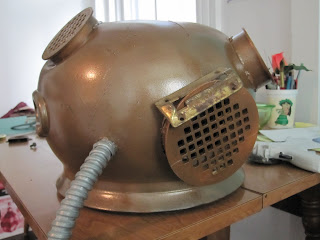 I also made a trip to the Habitat for Humanity ReStore, which is an awesome place to get all sorts of random tools, hinges, doo-dads, and other unidentifiable crusty metal things. I gathered a big bag of said things and when I brought them to the counter to check out, the manager said, “What are you doing with all this stuff?!” 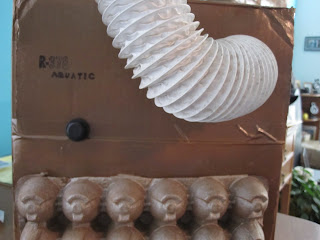 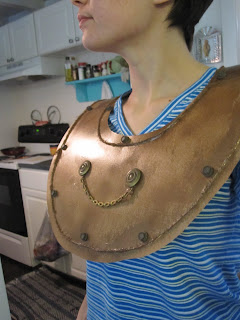 Next, very crucial- the neck plate (in real deep-sea divering gear, this and the helmet are all one piece, of course, but I actually needed to be able to breathe). The base for this is heavy Bristol board, plus more bolts and knobs I found at the ReStore, string, and bronze spraypaint. 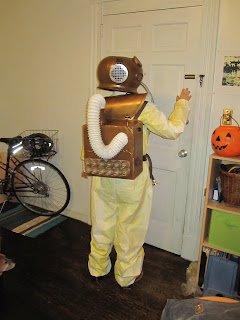 I also bought a painter’s jumpsuit, a terrible cheap plastic thing, but it worked for this purpose. I really wanted to make myself a yellow diver, based upon a distinct memory of a diving outfit I once saw at a marine museum in Oregon . There has been considerable backlash to my wanting to be a yellow diver (ahem, Jason!) but I carried through with the plan anyways. 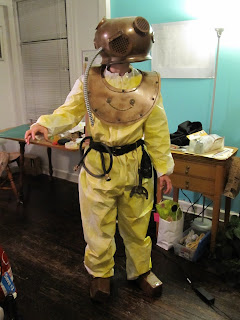 Here I am outfitted in the entire costume. I attached even more doo-dads onto a belt, and made “weighted” shoes out of cardboard boxes to drag myself down to the ocean floor. 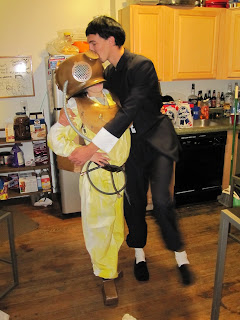 And although I didn’t win the costume contest at Balliceaux,a hip bar near here, (which was so crowded and wild I don’t even think the judges saw me), I did get a kiss on top of the helmet from Bruce Lee. Hee, hee.
If you are interested in seeing pictures of real deep-sea diving wear, I found this great website during my preparation/ research.