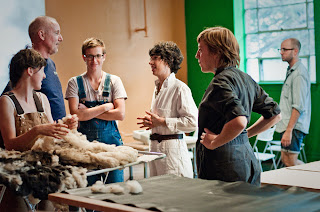 (Hope is in white… Photo by Terry Brown)
I have begun working as an artist’s assistant/ Sponge HQ Coordinator for Hope Ginsburg. She’s a social practice artist who gave a talk and studio visits during my post-bacc program at VCU. I was really intrigued by her work (it’s interest in community and non-traditional approaches to art-making, etc) and was happy to find out that she was in need of some help. I have some difficulty explaining what she does, but in essence she is interested in the sharing of knowledge and skills across disciplines and between people. For this process she uses the metaphor of the Sea Sponge, which for a long time was thought to be a plant and not an animal. The Sponge is the only creature that doesn’t move, looks the same inside and out, and if wounded, is able to completely regrow itself into a full adult Sponge. Like Sponges holding water, we have the ability to hold large amounts of knowledge within ourselves, and once we learn we can pass on knowledge to others (so they may grow, too). 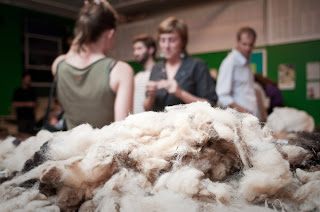 ( Wool felting is also a big part of the Sponge HQ…Photo by Terry Brown)
Hope’s recent work has been housed in a room known as the Sponge Headquarters, at the Anderson Gallery. This room is being used for many ongoing and in-progress works including a Sponge Conference, drop-in yoga classes, and wool Felting workshops. I’m helping her with a lot of web-presence stuff, blogging and uploading photos, etc, and probably other stuff as time goes on. Hope is really brilliant and energetic- I’ve really enjoyed working with her so far. There are many links, here are a few:
Hope’s website or the Sponge blog. She also did a project called Colablablab where she enrolled as a VCU student (oh, yes,Hope’s a professor at VCU), and she and other art students took a Bio class and Lab together and then made artwork inspired by what they were learning. Totally awesome!