I have really struggled with how to start this blog- I’ve been in Beijing for almost two weeks now and only today have I actually decided to sit down and post something (little tidbits of writing have been in progress for a while). Many of the people who will be reading this already know a lot about what I’m doing and I don’t really have the time to go into details; I guess they will come gradually. Short version: I am spending a semester in Beijing doing an intensive (think cram school) Mandarin language program. There’s not much time to do much besides study- four hours of class every day, and then the entire afternoon/ evening is spent preparing the next day’s lesson which can have up to 90 new words to learn, plus homework and other assignments. There’s also an extremely strict language pledge- aside from calling home, I will not speak English for the next four months (and my program takes it seriously here- they have actually put pledge-breakers on a plane back to the US). It’s hard and at times simply awful, but there are moments (which I hope will grow increasingly more often) where I am thrilled to be here, and feel that I’m mastering this ridiculously challenging language. When communication actually happens, I feel my motivation and energy to continue study revived.

Plus, of course, I get to experience a country on the other side of the world! It is really surreal to finally be here, after preparing to study in Beijing for two and a half years now. For as many times as I’ve had textbook lessons about the American student who just arrived in Beijing (including all the lovely vocabulary of airport, suitcase, customs, roomates, taxi, first impression) and as cliche as I felt walking through the airport, explaining to the driver how to get to Capitol University of Economics and Business, nothing anyone ever says or describes about China can really prepare you for what it’s like to be here. And, I can’t even claim to know what it’s like to be here- maybe let’s wait a few months for that one.
One of the biggest yet most obvious differences about Beijing is the unbelievable density of human beings. Yes, this is home to over 17 million people, but I have never seen an urban density like this before. People all over the street, crowded subway tunnels, packed buses. If you stop to think about how each one of these people (presumably) has somewhere they sleep at night, an apartment, owns a pair of slippers and a bar of soap, and eats breakfast, lunch, and dinner, it’s really mind-boggling. It’s like trying to imagine the Big Bang Theory. It also makes me wonder, how often do people here randomly bump into someone they know? With all of these bodies trying to get to their destination, and everyone with their head down (and right now, buried in a scarf) trying to move between each other, how would you ever know to look up and look for a familiar face? 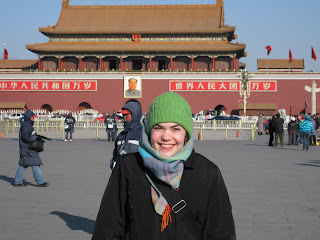 Yours truly, freezing cold in front of, uhm, whatsitcalled.