Since, as you all know, Beijing has a huge population, there is always someone willing to take a job that another person won’t. Therefore, I have thought of a few new opportunities that could be implemented to better use the man power of Beijing’s everyday person.

– What Not to Wear Zhongguo: a Chinese version of the US’s tv show with Stacey and Clinton, except geared towards Chinese aesthetics. I.e.; in China it might be okay to wear a puffy, furry panda jacket to work, but there are rules! For example, a panda jacket must never be paired with pink butterfly boots. (Unfortunately I don’t yet have pictures of this phenomenon- this isn’t the Sartorialist.)

-Official Map Maker for the 798 contemporary art district. Description: help people find their way around this confusing neighborhood. Making maps, by definiton, is not the same as making art. Visitors can’t find the art with out a map! 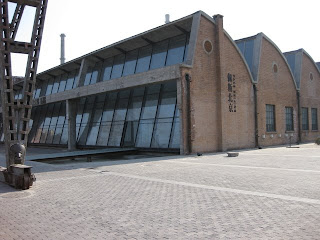 A view of 798 art district. I went there last weekend with Katie and Margaret (my friend from Oberlin who is also in Beijing for the month of January). 798 is a really fascinating district- all of the buildings were built as factories in the 1950’s and 60’s in conjunction with Soviet Russia. They are all giant, with Bauhaus architecture and giant saw-tooth rooflines. Many have huge windows, providing a perfect space to make art, which is why in the 1990’s the Central Academy of Fine Arts moved their sculpture studio into the then-vacant factories. This jump started what is now Beijing’s most thriving contemporary art neighborhood. It’s a really exciting place, and even though I don’t think the three of us chose a good day to go (since many galleries were closed and there weren’t many people around), I can’t wait to go back! (http://www.studio-international.co.uk/reports/beijing_798.asp– a nice brief history of the area, if you’re interested) 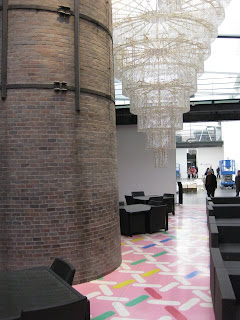 We weren’t exactly sure what this space was- we walked into this gallery (museum?) that was open but in the midst of putting up a new exhibit, and they had this really swank lounge area that probably becomes a bar on the weekends. That giant brick column is actually a giant smoke stack that goes through the ceiling.
– Pollution Particle collector (description: picks the dust and grime out of the air with a large, wet cloth). Apparently many of these people were employed before the olympics, but now they’ve gone back to their day jobs. 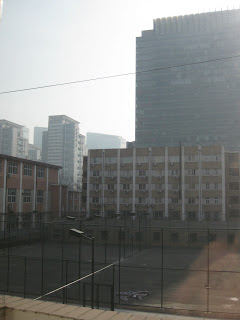 This is the view from my room on a pretty bad pollution day. This isn’t a bad photo, and the window isn’t that dirty- you just can’t see buildings very clearly when it gets so smoggy. Uck. 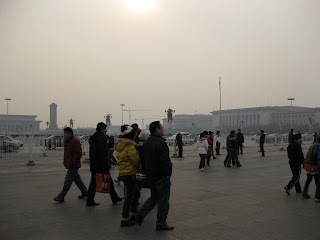 This is the view with my back to the entrance to Tiananmen- the furthest left building is Mao Zedong’s mausoleum (pretty sure). Gross, right? 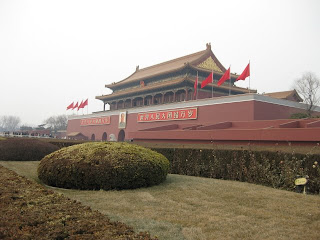 Looking towards Tiananmen (note that the sky is white, not blue)- this is the entrance to the Forbidden City (aka gugong), which I also went to last weekend. The Forbidden City was home to the emperor during the Ming and Qing Dynasties. 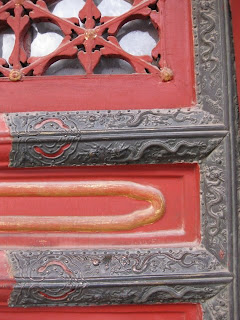 A close-up of a door in Gugong- very beautiful. 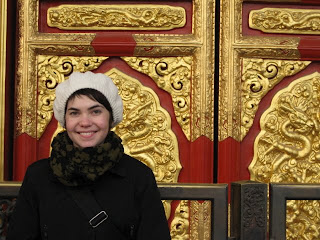 Me standing in front of one of the facades- it was so cold I think it made me smile weirdly.