David McKenzie and support for artists (or, Internet Tobogganing #1)

Recently I felt the need to come up with a term for something that occurs when one has some free time (or something to procrastinate on) and is on the internet. I was sitting on the couch with my mom, and after asking her to look up a simple embroidery stitch for me (I was embroidering a pillow) I watched her go from embroidery stitch blogs to a very well established embroidery networking and education site, to lists of books about embroidery, antique books on embroidery, antique and rare books, to finally someone’s completely digitized collection of rare books from the 16th century (or so). The moment of awakening came when we were looking at sheet music for a “catch” (another word for a round) and the lyrics were something like “if she has nice eyes, she must also have nice thighs”. We decided our experience of rushing full speed ahead into the depths of the internet, following interesting links and losing grip with reality wasn’t a singular event, this must happen all the time! Hence Internet Tobogganing. Or Internet Trivia Tobogganing, as you might say if you think you’ve learned something mildly useful (as, we did; now we know what a Catch is).

Anyways, tonight I just had another unforseen happening of Internet Tobogganing. There is nothing negative about I.T.; in fact, my journey this evening has been quite informative. I started out on Etsy, which led me to a tutorial on how to make sandals , annekata’s blog … and so on. Highlights from the most interesting bumps in the hill:
United States Artists is an organization that promotes artists as individuals and the important role they play in society. It seeks to alter the bizarre paradox that exists in American’s view towards art and artists. While 96% of Americans value the arts and are inspired by them, only 27% believed that the artists themselves “contribute ‘a lot’ to the good of society”(read the essay). I found the site to be really inspiring- a foundation that advocates for artists of all disciplines and hopes to inform people of the crucial role artistic individuals make to enriching the lives of us all. They provide fellowships each year for a handful of well-established artists in each field each year. Very cool. 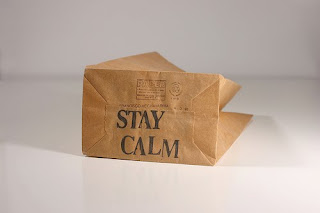 Dave McKenzie is one artist who received one of the United States Artists fellowships. My professor from the VCU summer program, Michael Jones McKean, had recommended I look at McKenzie’s work previously, but I had mispelled his name in google searches. Hooray for Tobogganing, then! McKenzie’s work is often conceptual and “explores notions of public space and cultural exchange in relation to the private self” (REDCAT gallery writeup). Perfect person for me to be looking at, no? The same review describes a work where Dave McKenzie prints and distributes a day planner that lists where he’ll be and when so that people reading the planner are able to meet up with him. The piece above, titled Self-help: hyperventilation bag, was included in a show that came to Richmond earlier this year (SO bummed I missed it).
This show, called Slightly Unbalanced, featured the work of quite a few big-name artists (and quite a few that I really like, as well) including Sophie Calle (I wrote about her here), Tony Oursler, Louise Borgeoise, Sean Landers and Bruce Nauman. The works in the show deal with psychological concepts such as anxiety, depression and obsession and figuring out what is “normal”. Just from reading the curator’s introduction on the website, I’m salviating. Where can I get the exhibition catalogue? The show came to the University of Richmond’s Joel and Lila Harnett Museum.
Okay. Enough Tobogganing for one night.