Back in the U-S-of-A- way overdue! 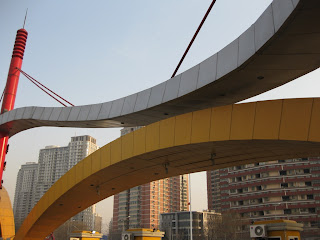 I am finally back in the United States after all of my adventures in China. I stopped posting on the blog in March, which was partially my decision (so little precious free time) and partially not my decision (Chinese government blanket-blocked all blogspot.com blogs). So here I am, threeish months later, with even more pictures on my computr that never made it up here. Unfortunately I don’t think I’m going to take the time to write about all the adventures and post all the pictures, even though I’d love to share. I’ll just do a quick summary for now, though, plus a map highlighting every province I’ve been to in China. Pretty cool! 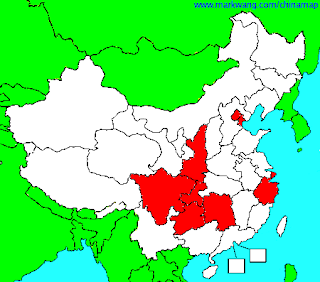 In alphabetical order: I have been to Beijing, Chongqing, Guizhou, Hunan, Shaanxi, Shanghai, Sichuan, Tianjin and Zhejiang. Whew!

So, after I came back from Chengdu, we had three more weeks of drudgery and learning before we were freed for a short spring break. Jason (a fellow student from ACC who is very dear to me) and I took an overnight train to Xi’an, where we saw the famous terra cotta warriors and sampled foods from the Muslim street. We also went to Tianjin for Jason’s Ultimate Frisbee tournament. Tianjin was extremely polluted and depressing, but the tournament was really fun. Although I’d never watched let alone played Ultimate before, I subbed in briefly! It was probably better for everyone if I just watched, though. 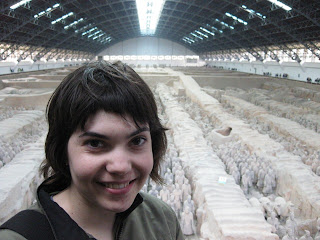 Then, back at acc, we rounded out the final few weeks with more Chinese language torture. We finished our semester-long independent projects, gave powerpoint presentations and turned in the 8-page-plus paper. My topic was on the contemporary art district in Beijing, 798, and all of the changes it has gone through; from a artists’ studios neighborhood to one of the biggest tourist draws and commercial centers in the city. I also interviewed two of my friends who run their own gallery. They also invited me, later, to act as translator for their gallery during Art Beijing, the largest yearly exposition on contemporary Chinese/ Asian art. 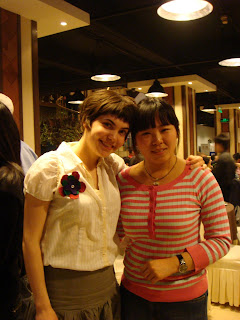 (my independent project advisor, Sun 老师, and me at the post-graduation dinner)

The last few weeks of the program dragged on FOREVER. The professors piled more and more work and projects and presentations on us, and meanwhile we all were literally losing our minds. The desire to speak English became a constant backdrop to every and all thought, the thought of making sounds like “fr”, “th”, “kl”, etc, would make us drool. Everyone handled this intense stress a little differently; I surprised myself by becoming intensely angsty and angry. It was hard to let on this anger (as were many other unhappy emotions) so I don’t think it affected anyone else too much, but it was really hard to stay postitive. Throughout the semester it was really difficult to remember just how much progress you’d made due to the constant criticism and increasing demands from the professors, and the last few weeks weren’t any different. We finally graduated, went out for karaoke with our professors and found out just how hard it is to switch back and forth between languages with much speed and accuracy. 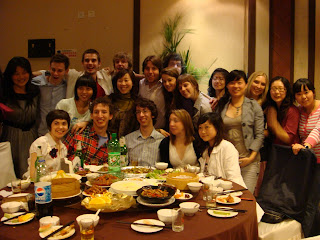 A few days after graduation, I traveled for two weeks with Jason to Shanghai, Hangzhou, Guilin and Yangshuo. We had a great time and saw some incredible scenery, including incredibly serene rice paddies and beautiful lakes and rivers. Traveling in China is hair-tearingly stressful on a normal basis, but during national holidays it becomes nothing short of hellish. Jason and I unknowingly planned our vacation to coincide with the national worker’s holiday, during which time everyone else in China goes on vacation, too. One night in Shanghai we found we were stranded after being unable to get on a bus OR train to Hangzhou, and that all hostels in Shanghai were booked. Things were looking really grim until I called my good friend ellis, a fellow China adventurer, who gave us the name of an awesome, tucked-away hostel (read ellis’ humorous account of traveling during the worker’s holiday here).

Then after Jason left to go back to the US, I hung out in Beijing for three weeks by myself. I ended up living with the cousins of the gallery-owner friends I worked with at the Art Expo. Living with two girls from a rural province whose admitted ages seemed to get younger and younger the longer I stayed there was difficult and eye opening. Since they couldn’t speak more than a few words of English, I was entirely reliant on my Chinese skills. Even though I’d spoken Chinese for the last four months, something about only speaking Chinese with native Chinese people with whom I shared no common background experiences was incredibly exhausting. I felt like I was constantly misunderstood and feared I frequently tripped over cultural faux-pas and possibly offended them. I likewise got frustrated with them when they couldn’t seem to understand where I was coming from or had different social customs. I did learn a lot from them, though; their story was very similar to many people currently living in Beijing. They moved to Beijing hoping to make a better life for themselves, but have had very little education and although their standard of living is higher now, they will encounter difficulties if they hope to get higher-level jobs. Aside from living with these girls I also hung out with my friend Julian who also attended ACC with me. He’s an all-around superstar student who started Harvard this fall. When he and I were feeling overwhelmed and weary of life in China we’d get together for western food or go to a beautiful, expensive shopping mall (ha!). I’ll be honest- it was hard to be alone in a foreign country and living in a stressful situation. I kept busy by planning my trip with my mom (Robin), sister (Viv) and wonderful friend (Maeve).
(maybe at some point I’ll update with pictures and a description of my final two-week trip in China)