So, now that I’ve been here over a month, time for basic introductions. Firstly, my school is in Beijing’s Chaoyang District (朝阳区）which is north-east of Beijing center. Beijing is made up of several ring roads surrounding the Forbidden City which is the traditional First Ring Road. My school is near the Third Ring Road, so relatively close to the center of Beijing. The subway map above is really confusing because (I think) the top of the map is South and the bottom is North, but anyways, my school is really close to the Dawangqiao station (大望路－我不知道为什么那个地铁图说“大望桥”？）on the Red Line #1. If you want to really have a good time- look me up on Google Earth! If you haven’t used it before you’ll have to download the program. Then search for Beijing, China, and then “Capital University of Economics and Business” (the school that ACC is housed in). You’ll be able to see where I’m staying (the building in the north-east section of the campus), and if you zoom out to the west, you can see the CCTV building, too.

This is the view of our South entrance from outside. The gold characters say Shoudu jingji maoyi daxue (首都经济贸易大学） or CUEB. There are guards on watch 24/7 to let cars in and out and monitor the people walking in and out.

This is inside campus looking at the South gate. On the left are steps going to the library (which I haven’t been to- no art books, just economic books in Chinese), and on the right is a small park 公园 which occasionally has a few old people doing their morning calisthenics (my favorite is the clapping and reciting rhythmic sayings. 功课很好玩！

Dis eez the outside of my dorm building- a little glassed in entry way. We have classes and live in this same building, which seemed like an awful idea when I first got here, but it’s actually not that bad.

Outside of the building. Everything is dead because it is winter and dirty beause it is Beijing and until last thursday it hadn’t rained in 3 months! Today it snowed a little bit too, which means it’s cold, but I’m just glad to have some precipitation. A little snow is actually kind of nice (I never thought I’d say that).

This is a car. And also the view of the North gate from inside campus.

Outside the Bei (north) gate looking west. The angular building in the distance is the one that caught on fire a week ago Monday. Apparently they didn’t completely put out the fire until Tuesday morning (when I took this picture). The sky was really hazy until the afternoon, and the building was pretty charbroiled-looking. 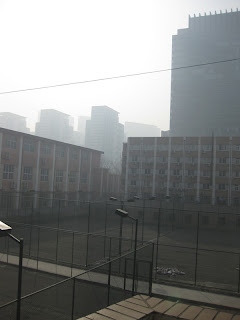 That same day, a picture from inside our room looking out. Horrible! Our room has a little balcony, which is nice to go out on when you want to take a break from studying. 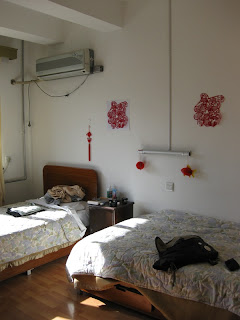 Ze rrrooom. Katie bought some little New Years delibops, but it still is pretty boring and spare. Unfortunately I did not bring my art studio with me, but I’m hoping in a spare minute I can work some Theora Magic on the walls. hmm. Siena, you know what I mean.

Each room has it’s own bathroom, which is great.
Next up, pictures of my homework- another balanced part of daily life at ACC.