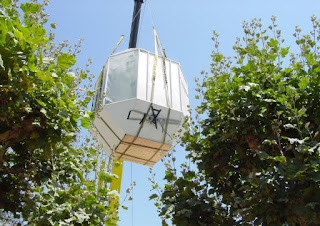 Greg Niemeyer is an artist and associate professor of New Media at UC Berkley. His work experiments with ways to incorporate digital art into the public realm, ideas of interaction with the natural environment as well as with eachother and play. One of his works, Oxygen Flute (2002) was installed in the Hearst Museum of Anthropology garden. The work was a small greenhouse-like pod filled with bamboo and other plants. From his website: “Inside the chamber, a Carbon Dioxide monitor tracked the changes in air quality due to the players consumption of Oxygen and the plants’ consumption of Carbon Dioxide.” The resulting quality of air was represented by digitally-produced bamboo flute music. His artwork is extremely theoretical but really engages the viewer in unexpected ways. http://studio.berkeley.edu/niemeyer