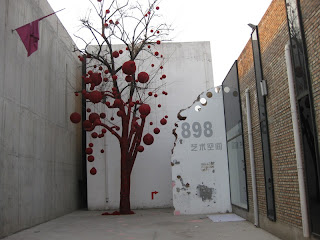 Firstly, more photos from 798 taken during my second trip there. Above and below, beautiful courtyard where a tree had been entirely wrapped with red string. 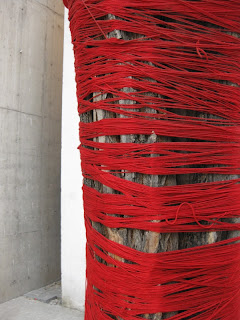 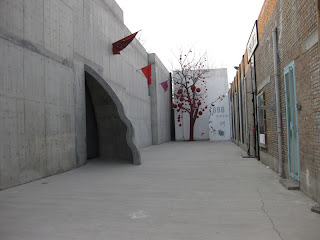 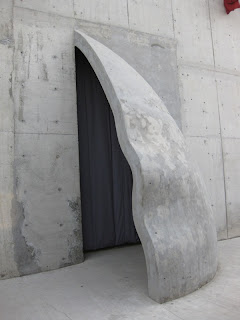 This curved concrete bit is actually an entrance to a gallery. Very cool and minimalist. 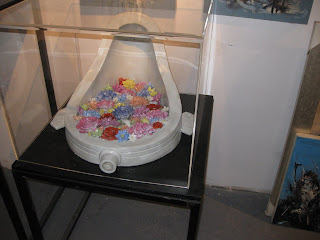 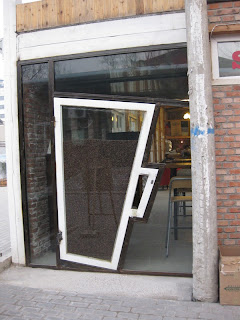 Yes, Ally, I went here! The coffee shop with a coffee cup filled with (real!) coffee beans for a door. They played American country western music, which seemed a little odd to me. 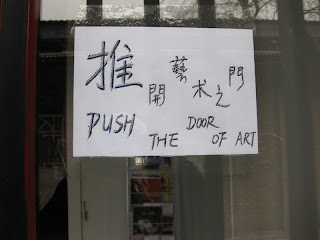 Another door. For the “weird signs in English” photo album. For some reason the Chinese characters are traditional which are not used in mainland China. 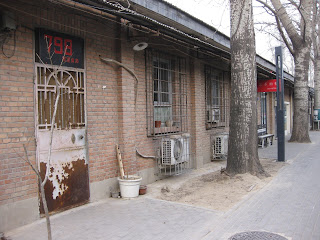 798 is pretty grungy, but that’s what makes it so cool. Artists looove the grungy grimy. 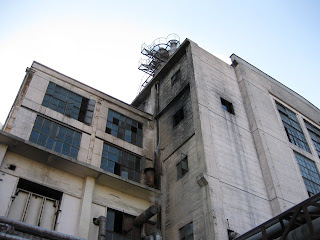 Factory which is still being used as such.
Tonight is the last night of celebration of the Chinese New Year (the lantern festival), and also the last night to set off fireworks. Fireworks and firecrackers are readily available during this time of year, and anyone can buy them and set them off, anywhere, anytime. Since loud noises are believed to scare away evil spirits who might be lurking at the start of your new year, it would seem that almost everyone in Beijing participates in this ritual. Although they are beautiful and New Year’s Eve at midnight was incredible, after about 3 weeks of constant booming (daytime, too!) I’m really quite ready to have it come to an end. Earlier tonight there was quite the upset in the ACC dorm because we thought that the new CCTV building had caught fire from the fireworks. For a panicked 15 minutes or so we were all leaning out the windows trying to see through the haze and smoke (caused primarily by the fireworks, and only somewhat by the fire). Turns out it was a nearby building instead, and the fire was put out fairly quickly. Still, this is why letting a city of 17 million people set off fireworks at their leisure and discretion is not entirely without risk. The CCTV building is an architectural marvel and was only recently finished. It looks like this: http://images.businessweek.com/ss/05/12/china_wonders/image/cctv.jpg (there is a current name-the-building debate going on, and the vast majority of Beijingers are already referring to it as “The Big Underpants”) 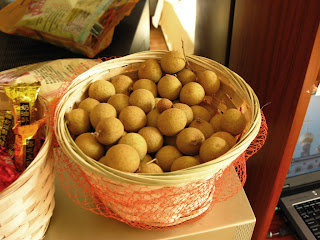 These are Longgan- a fruit I’d never seen before coming to China. Since I’m all about rare/ unusual fruit I was really excited when my roomate brought these home. On the inside they are sweet and translucent like a grape but have a pit like a cherry. A little obnoxious to eat but it’s worth it. 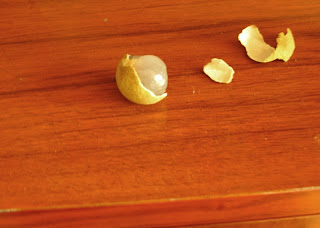 Time for shower and review the characters one more time and then sleep.