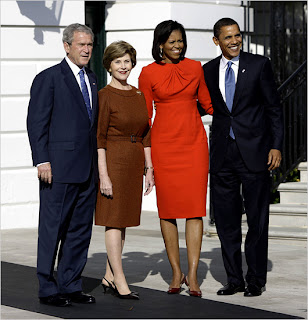 Here’s one to start. Isn’t this so amazing? (from nyt.com)
I decided not do 10 images from major events that have occurred in my lifetime, or famous images because we’ve all seen them all to the point of nausea (like September 11th, Paris Hilton mug shots?). I’ll leave the compliation of those photos to Phaidon or Time magazine.
Last year in my Korean history class we discussed how the historical setting in which you grow up affects the way you discuss your own life, or how you write your own autobiography. For instance, a woman of the royal court in the imperial era of Korea would write an extremely impersonal and family-oriented autobiography, whereas great American men of the 20th century largely wrote autobiographies that are self-oriented and rarely show assistance from others or personal struggle. Our final paper from that class was to write our own autobiography showing the effects of the historical events that have happened in our own lifetimes. I chose the book Material World as one of the most influential historical ‘events’ of my lifetime. 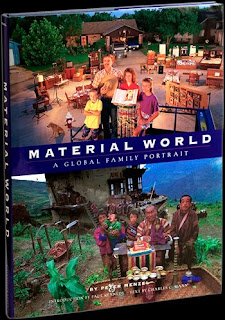 From my paper (sorry I’m being so talky):
“Filled with beautiful color photos, Peter Menzel (an award-winning photographer), along with many helpers visited 30 nations around the world and selected one family from each. This family, chosen to represent national averages in terms of wealth and size, were each photo-documented for a week, including each family member’s daily activities, and a ‘big picture’ where every material possession the family had was brought outside their home for a photo. This incredible visual representation of what it is like to live in countries all around the world had a huge impact on me as a pre-teen. I remember feeling really frustrated with the family chosen from the United States because they were so different from me; and thus I became aware of how many different lives one could lead within a certain country, and how many lives I still wasn’t aware of because they weren’t all represented in the book. I consider the publishing of this book a historical event, albeit small, because it is only in our globalized era that creating this book was even possible.”
I know there is a copy of this book in Mudd- I would really like to go scan some images from it so you can understand more what it is about. Here is the Amazon page: http://www.amazon.com/Material-World-Global-Family-Portrait/dp/0871564300