conceptual photography
I love working in the art library because sometimes you encounter treasures like this without any effort at all. You come into work, and this is lying on the worktable: 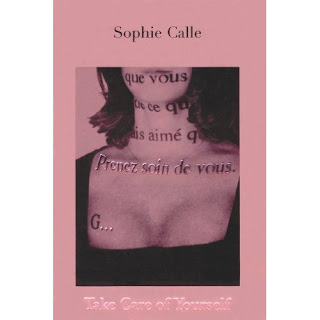 This is Sophie Calle’s latest work and was featured in the Venice Biennale 2007. I have attached an excellent article explaining it and her work. I did not have time to look at the entire book (or watch the included dvds) while at the art library; I hope to someday. I believe it is library use only, so it should be around for people to look at. Below is a picture from the installation at the Biennale. Can you imagine? 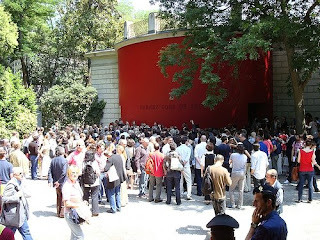 From The Guardian by Angelique Chrisafis Sat. June 16, 2007

He loves me not
When a boyfriend dumped her by email, French artist Sophie Calle asked 100 women to read it – and became the star of the Venice Biennale, reports Angelique Chrisafis

You are one of France’s best-known living conceptual artists. You’re 51 and visiting Berlin. Your mobile beeps, it’s an email from your boyfriend. In a hideously self-absorbed message about human emotion, he dumps you electronically, saying it hurts him more than you. He signs off: “Take care of yourself.” You’re heartbroken. Then you think of its potential as art.

Sophie Calle has filled the French pavilion of the Venice Biennale with a praised exhibition about her emailed dumping letter. Over two years later, she distributed the missive to 107 women professionals, photographed them reading it and invited them to analyse it, according to their job. The ex’s grammar and syntax have been torn apart by a copy editor, his manners rubbished by an etiquette consultant and his lines pored over by Talmudic scholars. He has been re-ordered by a crossword-setter, evaluated by a judge, shot up by a markswoman, second-guessed by a chess player and performed by actress Jeanne Moreau. A forensic psychiatrist decided he was a “twisted manipulator”. The temple to a woman scorned is entitled “Take care of yourself” (Prenez soin de vois), immortalising lines that Calle, if she hadn’t had recourse to the international art world, might have read again and again in tears.

“The idea came to me very quickly, two days after he sent it,” she said. “I showed the email to a close friend asking her how to reply, and she said she’d do this or that. The idea came to me to develop an investigation through various women’s professional vocabulary.”

At first it was therapy; then art took over. “After I month I felt better. There was no suffering. It worked. The project had replaced the man.” She feared he might come back seeking a reconciliation, which would have ruined the whole thing.

Sitting under a pair of stuffed bull’s heads in Calle’s warehouse home south of Paris, surveyed by her taxidermy housemates (a bear in a rocking chair, a tiger in a necklace and a zebra), it’s hard not to wonder what man would send her a monstrous email like this.

He must have known he would be immortalised by French art’s game-player in chief, the Marcel Duchamp of emotional dirty laundry. This is the woman who 30 years ago started her career following and photographing strangers in the street, once trailing a man to Italy. Over a decade before Tracey Emin displayed her soiled sheets, Calle invited strangers to sleep in her bed for eight-hour shifts over nine-days, photographing and asking them what age they were when they last wet the bed.

She got hold of a lost address book, interviewed everyone inside about its owner and published the results in the newspaper Libération, delighted when he sought revenge by publishing a nude photo of her. She got a job as a chambermaid in a Venice hotel to rummage through guests’ possessions and photograph the mess people left.

Calle won’t say who dumped her, only that there is a one-word clue at the start of the book of the exhibition. Did he approve? “He knew about it. He didn’t like the idea, but he respected it. So he decided not to meddle.”

Was she looking for revenge? “No. And a fear that it might be interpreted like that initially made me hesitate.”

She doesn’t use her all boyfriends as work, she insists. Her current partner has asked her not to do anything based on him and she has agreed.

Take Care of Yourself is only her second piece about a partner, she says, if you don’t count No Sex Last Night, a film about marriage made with her then husband. Her first dumping piece, Exquisite Pain, is to be revisited in a new exhibition with her “guardian angel” Frank Gehry in Luxembourg. It is the record of how in 1985, Calle won a bursary to Japan for three months and her boyfriend arranged to meet her in India at the end. As she was boarding the plane she got a message saying he was in hospital in France. He had actually met someone else. She repeatedly told the story of her dumping, asking others about their worst moments of suffering. She found it too raw to show the piece for almost 20 years, until a Pompidou Centre exhibition in 2003.
Raking through her emotional life for subjects, she has been compared to women artists including Emin and accused of cheap tricks. “Love, life and death – all of that is the most mundane material for artists. It amuses me because people often say, doesn’t it bother you to show your private life? I say, well if you ruled out private life, you would have to eliminate all poetry. Victor Hugo, Baudelaire and Verlaine use their emotional life as subject matter. What I’m putting on show is a dumping. All dumping letters are the same, they’re unpleasant. This one is neither better or worse than all the rest. It’s an aid to a break-up. I don’t talk about the man, and all the better. The subject is the letter, the text … It was the words ‘take care of yourself’. Those words made me click. He said ‘take care of yourself’, he knows how I take care of myself, he knows what my method is.”

Calle’s “method” of dealing with the suffering the world throws at her is to see it all as a game of chance and coincidence, a ritual ripe for exposure on a wall. The daughter of a doctor who collected pop art and a press officer mother, she never went to art school. She keeps no sketchbooks. “Ideas just come to me,” she said. As a teenage left-wing militant she campaigned to legalise abortions and took off to travel the world. When she came back to Paris, aged 26, she began following strangers because she didn’t know what to do with herself. “It was a way to force myself to get out of the house without having to decide what I was doing.”

A prime example of Calle turning pain into art is another piece for the Biennale. Calle says that when she was told last year that she would be showing at Venice, another call came through: her mother saying she had a month to live. Calle nursed her at home. But she had heard that people who are dying often wait for the two minutes when their relatives leave the room to slip away.

“It became almost an obsession. I wanted to be there when she died. I didn’t want to miss her last word, her last smile. As I knew I had to shut my eyes to sleep, because the agony was very long, there were a risk I might not be there. I put a camera there, thinking if she gave a last jump or start, a last word, at least I’d have it on film.”

This led to another fixation. “The obsession of always having a tape in the camera, changing the tape every hour, was so great that instead of counting the minutes left to my mother, I counted the minutes left on each tape.”

Calle was in the room when her mother died. She hadn’t shot the footage as a piece and didn’t feel ready to use it, but her Venice curator persuaded her. “Pas pu saisir la mort” is a film installation of the last minutes of her mother’s life. “I spoke to my mother about the Biennale … She was so horrified about not being there, I thought the only way I can make her be there is if she’s the subject.”

Calle says death is part of her life. As a child she lived on the edge of Montparnasse cemetery in Paris. She would cross it four times a day to and from school, invent families on the tombstones and take them food. Her mother would enact elaborate funeral rituals for her pet goldfish and cats. The view out of her kitchen window is a pseudo-cemetery of funeral plaques she built herself.

Calle will continue to deal with what annoys and hurts her by turning it into a game. Her latest project is spotting mistakes in journalists’ articles about her art. “I thought to myself, maybe there’s material in taking the errors and enacting the works just as they are described by the journalists? So if a journalist mistakenly said I’d done a project with deaf people, I’d have to do a project with deaf people.”

I think about inserting some wild inaccuracies to give her some space for her work. “Before I got irritated and said, ‘it’s not true, I never said that’, I now rub my hands, when I’ve found something wrong. It’s another way of taking care of myself, a way of turning things around. Instead of being upset about being misinterpreted, I go looking for it, I hope for it, I wait for it. It’s the right method, turning things to my advantage in order not to suffer from them.”